Whether you already live in London, often visit for weekend trips or just wish to visit the big smoke one day, we’ve got a refined list of the best London Instagram photographers that you certainly won’t regret following!
Instagram is THE place for some instant inspiration, so what better way to liven up your feed than with some beautiful landscapes, creative angles and jaw-dropping London scenery from this list of urban Instagrammers. Take a glimpse about town and see what exactly it is about London that these contemporary photographers love so much. Take a look at how these Instagrammers are taking on London and what they love about the city!
Matt Scutt
The words refreshing and idyllic come to mind when talking about Leila Peterson’s Instagram photography. Although it’s not all shots of London, it’s London-infused with a mixture of other beautiful settings and travel destinations which all have the common theme of simplistic beauty.
With a clean and contemporary appearance, Leila consistently captures subjects and scenery during different times of the year where unique lighting forms the basis of her visual story.

Emmanuel Cole
Emmanuel Cole’s photographs are an energetic homage to the street life of London. Taking place in some of the capital’s most vibrant neighbourhoods, Emmanuel’s photography is often bursting with energy and showcases the busy and bustling side to London.
Being one of London’s most inspirational Instagram accounts and coming from East London himself, Emmanuel is most famous for his street photography and realistic and gritty approach to capturing London.

Michael Tomas
A London based photographer, time-lapse cinematographer and Instragram influencer, Michael Tomas focuses on London’s skyline and architecture for his inspirational snaps! Not only has Michael perfected the knack of capturing movement in his still images but he also manages to capture the vibrancy of this thriving city, whether it’s day or night and whether it’s sunny or grey and cloudy.
His Instagram photography could certainly be described as atmospheric.

Neil Andrews
Out and about in London most weekends, Neil Andrews specialises in travel, cityscape and urban photography. Describing his photography style as “eclectic and evolving,” the emphasis throughout his work is on composition, leading lines and the graphic nature of a shot.
Mixing striking imagery of famous landmarks with clever angles, Neil’s Instagram feed is a diverse showcase of London life and puts you right in his shoes as if you were there in the picture

Tun Shin Chang
Residing in London, Tun Shin Chang is a lifestyle and travel photographer who is all about telling a story through his camera lens. His fascination for beautiful pictures and passion for travel comes across in his photographs, whether it’s his street photography in Soho or imagery of picturesque doorways and street corners.
Drawn to lighting, especially natural lighting, Tun Shin creates his photographs by wandering the streets of London and stumbling across new places and secret hideaways around every corner.

Zoe Timmers
Inspired by light, sounds and buildings, Zoe Timmers loves nothing better than walking around and discovering new areas of her city. Zoe’s Instagram feed is an incredibly satisfying collection of iconic London settings mixed with her passion for travel and beautiful countryside which instantly puts your mind at ease.
Zoe’s iconic London settings include timeless images of Big Ben and Southbank, Tower Bridge, London buses, as well as a pleasing amount of cute cars and pretty London doorways.

Mr Whisper
Mr Whisper, a.k.a Bal Bhatla, is best known for his inspiring street photography and capturing the everyday life with an artistic perspective. With a mysterious yet crisp aesthetic to his photographs, Mr Whisper is often most drawn to Soho, the West End, Southbank, Barbican and of course the London Underground.
Using his Instagram account as a living, breathing portfolio, Mr Whisper has perfected the art of capturing and bringing to life the looming alleyways and atmospheric grey clouds of London, the night-goers catching the last tube home, and everyday life of the streets.

Heather Cole
Whether it’s the bright lights of the night or an early morning mist over the Thames, photographer Heather Cole captures truly atmospheric moments from England’s capital city. Specialising in capturing incredible sunsets over the city, she manages to bring stillness and calm to this busy and thriving place.
Primarily portraying the bright lights and bold colours of city life, Heather’s Instagram also portrays the gloomy yet breathtaking side to London. Her imagery really is a work of art and each photograph is unique in its own right.

Jess MacDonald
As the name suggests, Jess MacDonald a.k.a Miss Underground loves taking snaps of the London Underground in all its glory. Although always busy and scattered with people, Jess manages to envision a deserted and quite eerie transport system. It’s rather mesmerising and quite fascinating how she manages to do this!
Being an iconic part of London that most people will have a love hate relationship with, Jess manages to capture the Underground at its best with her clever angles, lighting and artistic ability.

Niall O'Leary
If you’re looking for gritty, black and white imagery to add to your feed, Niall O’Leary’s photography certainly won’t let you down. With an eclectic mix of London streets, people, architecture and landmarks, his photographs are incredibly powerful and atmospheric.
Mixing the fast-paced nature of city life with a moody and mysterious undertone, O’Leary’s imagery is simple yet dramatic and is anything but your ordinary postcard picture of London

Fran Katerbaum
Fran Katerbaum is an architect with an eye for detail. Her photography takes on a unique approach to capturing the beauty of London and what it has on offer. Focusing on London and beyond, as Katerbaum loves to travel, her feed is a tasteful mix of architectural inspiration - from staircases and cathedrals to glass buildings and striking archways.
Katerbaum encourages one to look up and see the beauty in four walls, the structure of a historical building, residential windows or even bridges. She also showcases the new versus the old in a clever and aspiring way. 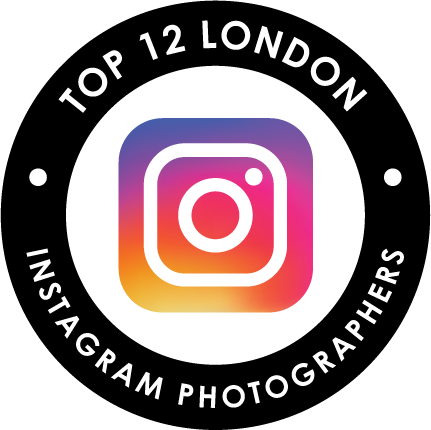